A replica lighthouse has been purchased by Pentland Ferries to support the CLAN cancer charity – and the company is inviting anyone who has benefitted from CLAN’s work to have their picture taken with the lighthouse, which has been installed at St Margaret’s Hope. The Banks family who own and run Pentland Ferries are also inviting people to share the photos on a fundraising page for CLAN which has been set up on Facebook. 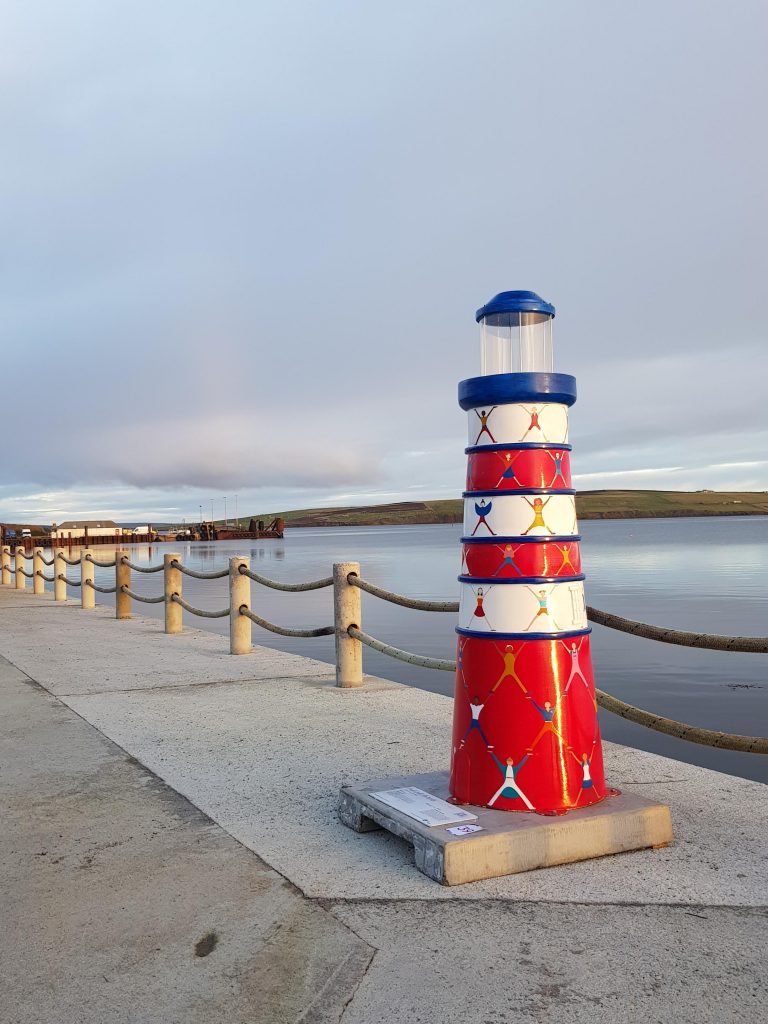 The Banks family were delighted to secure the lighthouse in the charity auction following CLAN’s highly successful ‘Light the North’ fundraising campaign. CLAN is particularly close to the family’s hearts. They experienced first-hand the support that the charity offers cancer patients when company owner Susan Banks underwent treatment at Aberdeen Royal Infirmary earlier this year.

Susan Banks, said: “The support offered by CLAN to cancer patients in the North East of Scotland and the islands is absolutely outstanding. Like myself, there are so many Orkney people who have benefitted from staying in CLAN Haven and have really appreciated the practical and emotional support that the charity provides, all of which helps lighten what can, of course, be a very difficult journey.

“Feeling indebted to the charity, we were very pleased to get behind the ingenious ‘Light the North Lighthouse Trail’. To start, we formed our own family team and walked the 430-mile equivalent distance between the lighthouses, raising £400 for the charity, and then we bid to buy one of the 45 creative pieces in the auction. We managed to secure ‘People Light The North’, the lighthouse designed by Design and Code in Aberdeen which was sponsored by the University of Aberdeen and had been situated at the Sir Duncan Rice Library during the trail.

“We are now delighted to have the 2.5 m lighthouse erected at the marshalling area at St Margaret’s Hope, with a backdrop of the village. We would like to invite as many people as possible who have, directly or indirectly, benefitted from CLAN to come and have their picture taken with the piece. For those who would then like to share their picture or make a donation to the charity, we have a fundraising page on Facebook and welcome their pictures, which we will gather and share with CLAN.

“We recognise that this is a particularly difficult time for cancer patients, experiencing delays in diagnosis and treatment, so now more than ever we rely on the magnificent support that CLAN provides. I know that the charity will, in turn, welcome Orkney’s ongoing appreciation and support.”

This website uses cookies to improve your experience while you navigate through the website. Out of these cookies, the cookies that are categorized as necessary are stored on your browser as they are essential for the working of basic functionalities of the website. We also use third-party cookies that help us analyze and understand how you use this website. These cookies will be stored in your browser only with your consent. You also have the option to opt-out of these cookies. But opting out of some of these cookies may have an effect on your browsing experience.
Necessary Always Enabled
Necessary cookies are absolutely essential for the website to function properly. This category only includes cookies that ensures basic functionalities and security features of the website. These cookies do not store any personal information.
Non-necessary
Any cookies that may not be particularly necessary for the website to function and is used specifically to collect user personal data via analytics, ads, other embedded contents are termed as non-necessary cookies. It is mandatory to procure user consent prior to running these cookies on your website.
SAVE & ACCEPT